A roundup of stories/posts/videos I found interesting:

The Jacquard Loom is historically important,  not only for its direct impact on the textile industry but also for the inspirational role that it played in the emergence of punched cards and computers.  Jacquards are still very much a live industrial technology, although the warp threads are now lifted by computer-controlled solenoids or hydraulic cylinders rather than by direct mechanical linkage.  Several attempts have been made to create affordable Jacquard looms for home use, but they have foundered on the cost of purchasing and installing a solenoid for every warp thread.  Here is a very clever way around that problem.

Also, an explanation of how a traditional Jacquard works.

Speaking of the textile industry, I wrote a couple of years ago about attempts to automate apparel manufacturing, especially the work of an Atlanta company called Softwear Automation and their product Sewbot.  So I was interested the other day to see this piece about apparel automation in Bangladesh.

See also this report from McKinsey on Nearshoring and Automation in the Apparel Industry.

Reviving manufacturing in Singapore, with the aid of robotics.

Are electronic medical records actually a detriment to knowing the patient?

Outgrowing Software…Benedict Evans suggest that when everything is a software company, then the important questions are somewhere else.

Also from Benedict Evans: Are You a Seal?  (If you are, watch out for Amazon!)

Constructing a bridge in Prague, in 1357.

Speaking of construction: Automation in the Construction Industry

(An earlier version of this post was published at Ricochet; member feed only) 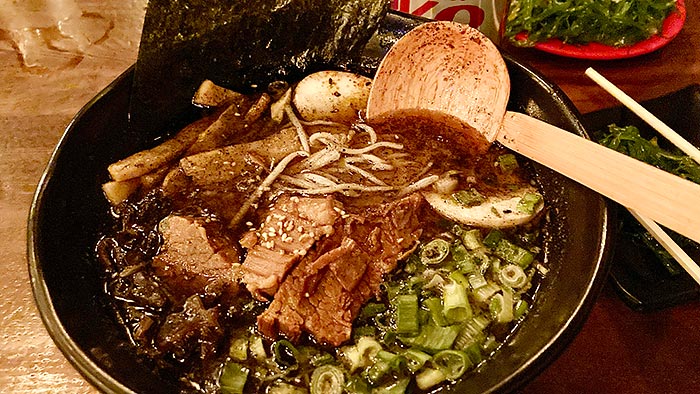 Ichimi ramen bar is the official ramen bar of the Chicagoboyz blog.

If you are a teacher or professor, you have a legitimate sphere of authority concerning teaching methods, classroom discussion, grades, etc.  But you do not have legitimate authority to focus class time on selling students on your own personal political or social views–still less do you have authority to assign grades based on compliance with those views.

If you are Chairman or CEO of a publicly-traded corporation, you have a legitimate sphere of authority concerning organization design, business strategy, financing, people-selection, and many other things.  But you do not have legitimate authority to devote corporate resources–of which you are not the owner–to promoting your personal political views.

I also observe that there are plenty of people in leadership positions who, while showing very poor performance in their own jobs, are insistent that people outside their sphere of authority do things to solve their problems…a prime example being governors and mayors who blame  the skyrocketing crime rates in their jurisdictions on lack of (what they consider) proper gun control in adjacent states, when there are plenty of things they could do within their own scopes of authority and influence to address the problem.  Similarly with education–tolerate increasingly-awful performance on the part of the schools and malevolent interference on the part of the teachers unions, while blaming the problem of uneducated graduates entirely on Systemic Racism…so those politicians are off the hook because Somebody Else does something, or some set of things.

I began these updates back when the Chinese Commie Crud (tm Sgt. Mom) started and it’s time for another one. I’ll put it below the fold to spare those who aren’t interested.